Alexander Volkanovski is still interested in a third bout with Max Holloway, despite the fact that he’s already won the first two fights.

Following his dominating performance against ‘The Korean Zombie’ Chan Sung Jung at UFC 273, Alexander Volkanovski confirmed with BT Sport that he’d accept a trilogy fight against Holloway. The defending featherweight champ just doesn’t sound interested in chasing it. He said:

“We’ll see if [Holloway] even wants it. He keeps talking about other fights and moving up, money fights and all that. If he wants to do that, fine, do that. I’ll just keep doing my thing. We’ll see. Obviously we’re going to talk to them. We’ll make the next fight for the right reasons. If there’s going to be a trilogy, it’s going to be for the right reasons. Not because I want to prove something to haters and whatnot. But it is still a fight that I want, and I think the crowd wants. I think it’d do good PPVs, it’s a big fight. So it makes sense. So I’m guessing that’s what it’ll be. But we’ll talk to Dana and Sean Shelby and we’ll get some money for it too.”

Watch the full interview between Alexander Volkanovski and BT Sport below: 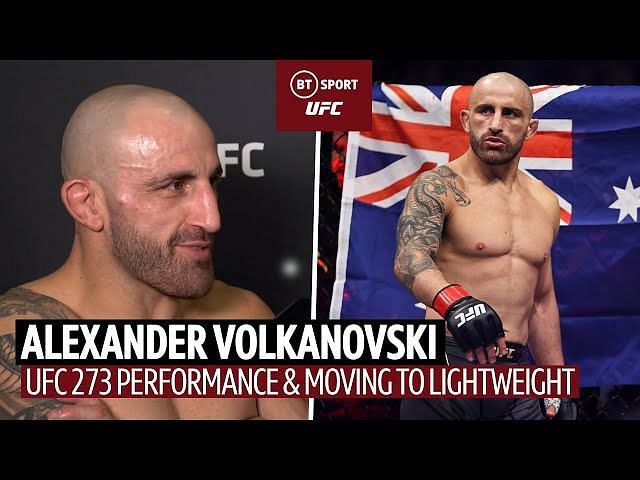 Alexander Volkonovski’s win over Chan Sung Jung marks his third successful featherweight title defense. With the level of dominance ‘The Great’ showed against No. 2 ranked Brian Ortega and now No. 4 ranked Chan Sung Jung, there aren’t many opponents left for him to face at 145 pounds that fans would consider competitive. That’s another reason why a third Max Holloway fight is likely.

Korean Zombie had no chance… the only person who can dethrone Volk is Max Holloway #UFC273 https://t.co/WpE4ugp0ep

Alexander Volkanovski has suggested a move to lightweight is possible

If there’s no legitimate challenges for Alexander Volkanovski to face at featherweight, ‘The Great’ declared he’d move up to lightweight and look for opponents there.

“I’m in a position where I can do a couple of things, and if this division doesn’t want to sort itself out and they’re all going to sit back and f**king wait for s**t, then fine, I’ll move up and fight lightweight. I’m an easy champ to understand: Take that number one spot, you get that shot. If not, let’s move up. I think we’re in a good position to move up, maybe see what happens in this lightweight division title fight, and maybe move up.”

Alexander Volkanovski is no stranger to the lightweight division. Several of the fights in his minor league days were fought at 155 pounds, and he even has five welterweight fights on his record from the start of his fight career.

Alexander Volkanovski’s only career lost came in 2013. He fought Corey Nelson at welterweight.