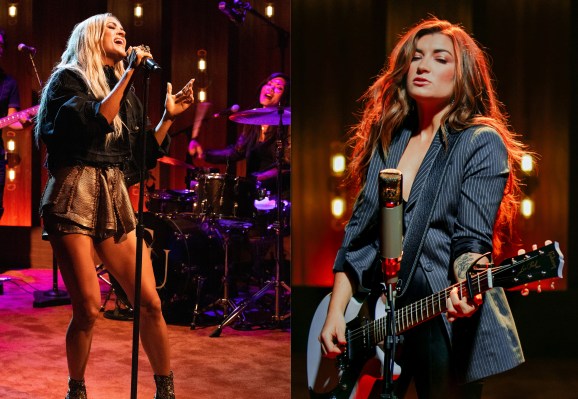 Apple is introducing a new perk for Apple Music subscribers, Apple Music Sessions, which gives listeners access to exclusive releases in spatial audio that have been recorded in Apple’s music studios around the world. The performances are also filmed, providing subscribers with companion live music videos.

The sessions offer musicians the opportunity to recreate hits from their catalog and cover classic songs for listeners to enjoy.

Carrie Underwood has 25 CMT Music Awards, the most-awarded artist in the award show’s history. For her Apple Music Session, Underwood performed two of her own songs, “Ghost Story” and “Blown Away,” plus a cover of Ozzy Osbourne’s “Mama, I’m Coming Home.”

Tenille Townes is a rising country music artist, most recognized for her hit song “Somebody’s Daughter.” She performed the song along with “Same Road Home” for her Apple Music Session. Townes also covered “At Last” by Etta James.

Country music singers Ronnie Dunn and Ingrid Andres are lined up next to release sessions, Apple announced. The company plans to have more artists in the future and expand Apple Music Sessions into other genres.

Apple has been steadily adding features and exclusive experiences in order to garner more subscribers for its music service.

In 2020, Apple rolled out At Home Sessions with artists such as Arlo Parks reworking three of her tracks in the comfort of her own home. Apple Music Sessions seems to be a step-up from this, inviting artists into professional studios and recording songs with spatial audio technology.

The company is also looking to entice new subscribers by focusing on catering to particular interests. For example, Apple acquired classical music service Primephonic last year to expand its music offering for Apple Music classical fans. The acquisition of Primephonic is believed to be for Apple’s new classical music app expected to launch in 2022 with “visual, audial, and haptic” aspects for a distinct listening experience.