Austrian chancellor Karl Nehammer said he had “no positive impression” of his talks with Russian leader Vladimir Putin, after a last-ditch trip to Moscow on Monday to try to broker an end to the country’s brutal invasion of Ukraine.

Nehammer said he had held “direct, open and tough” talks with the Russian president that lasted for 75 minutes at a venue outside the Russian capital. The talks were held in Russian, with the aid of an interpreter, despite Putin being a fluent German speaker.

The visit — which caught many European allies off guard after it was announced on Sunday evening — comes as Russia moves to reinforce its military presence in Ukraine significantly, in an apparent prelude to a renewed offensive in the east of the country.

Nehammer’s trip is the first face-to-face meeting between Putin and a European leader since Russia’s invasion began six weeks ago and risks a break with a hitherto united front by Europe, the US and their allies to portray Moscow as diplomatically isolated as a result of its aggression.

In a statement following the conclusion of the talks, Nehammer said he had felt it was his “duty” to fly to Moscow and “leave no stone unturned”.

“This is not a friendly visit. I have just come from Ukraine and have seen with my own eyes the immeasurable suffering caused by the Russian war of aggression,” he said. 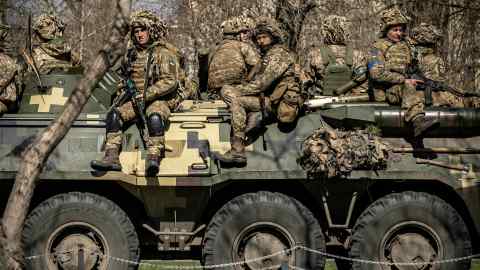 Austrian diplomatic sources said they were under no illusions about the prospects of the chancellor’s mission succeeding, but felt that it was necessary because of Austria’s unique relationship with Russia. Austria, which is not a Nato member state and is officially neutral according to its constitution, has long sought to act as a bridge between European and Russian interests not least because of its historical ties with Moscow.

No other European leader was politically placed to make the trip, one diplomat said, alluding to the French elections.

At the stipulation of Austrian officials, no photos of the meeting were taken and no press conference with Putin was held, over concerns the Kremlin would use it as propaganda.

Nehammer said he had directly confronted Putin about war crimes committed by Russian forces in Ukraine and said those responsible had to be held to account. He told Putin that there was now no way for him to “win” the conflict, and urged him to back down from further escalation.

“I also told President Putin in no uncertain terms that sanctions against Russia will remain in place and will continue to be tightened as long as people continue to die in Ukraine. The EU is more united than ever on this issue,” he said.

Nehammer felt it was important to deliver hard truths to Putin “face to face” said one Austrian diplomat, who said that the Russian leader was living in an information bubble.

The Austrian chancellery did not provide a readout of the Russian response to the chancellor’s démarche, but a member of the delegation said Putin had repeated historical grievances about the west’s interference in Russian affairs.

Putin refused to refer to the conflict as a “war”, they added, and he said allegations of atrocities against civilians in Bucha were a Ukrainian “provocation”.

The Russian leader did acknowledge the damage sanctions were doing to the economy, but said that resolving the conflict in the Donbas to his satisfaction was a higher priority.