The James Webb Space Telescope is one of NASA’s, and the space community in general’s, most exciting missions in the past decade, and the enormous observation platform’s first image, of distant galaxies actually behind our neighboring galaxies, was just revealed to the public on a live stream hosted by none other than President Biden and Vice President Kamala Harris.

The image has been named “Webb’s First Deep Field.” This target is the cluster SMACS 0723, according to materials circulated before the image went live. NASA described the imaging technique as using the “nearby” (but still impossibly distant) cluster’s mass to “magnify and distort the light of objects behind them, permitting a deep field view into both the extremely distant and intrinsically faint galaxy populations.”

That likely explains the interesting distortions visible among the many galaxies on view here — but we’ll know more soon. For now check out the description here. It’s “the deepest and sharpest infrared image of the distant universe to date.”

This method has been used before to image this very volume of space, but the Webb image is way, way better than previous ones. Here’s a section from the top right zoomed in a bit so you can see more detail in the galaxies, and that cool lensing effect: 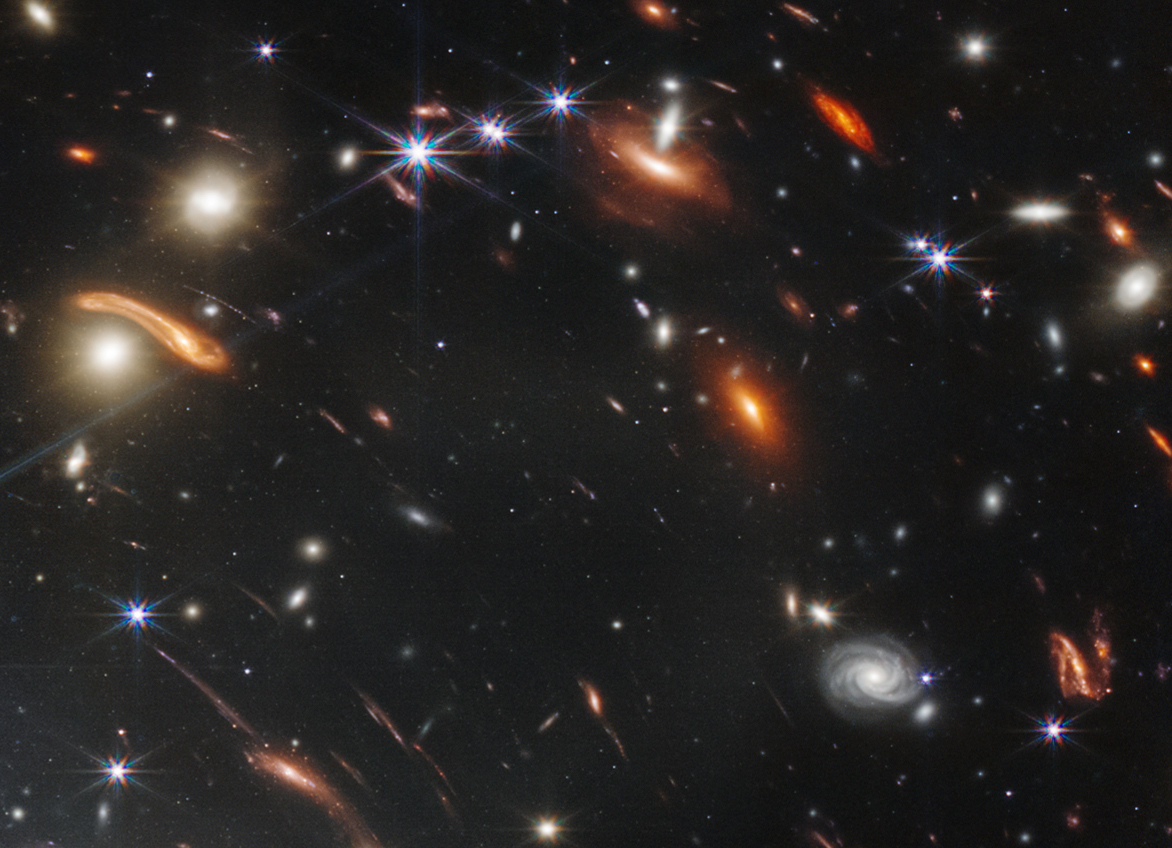 Tomorrow is the official big media day for the Webb, or JWST as it is often abbreviated, at which several more images will be shown off and all kinds of technical and astronomical information related. But it’s understandable that such a long-awaited (and much-delayed) event would get the presidential treatment.

“It is an example of how a scientific endeavor of the international rules and norms that govern cooperation in space; this telescope is one of humanity’s greatest engineering achievements,” said Harris.

The bus-sized Webb was launched on Christmas Day 2021, and after working its way to its position a million miles out from Earth (“First of all, that blows my mind,” said the president), it has been laboriously powering up and testing its many components and processes. The image we’re seeing today is the first “real” image, in that it’s the first one taken as a fully operational telescope — but we’ve seen plenty of others of inferior quality as the team shared its progress getting the Webb up and running (and briefly panicked over an unexpected micro-meteoroid hit — but aren’t they all?). 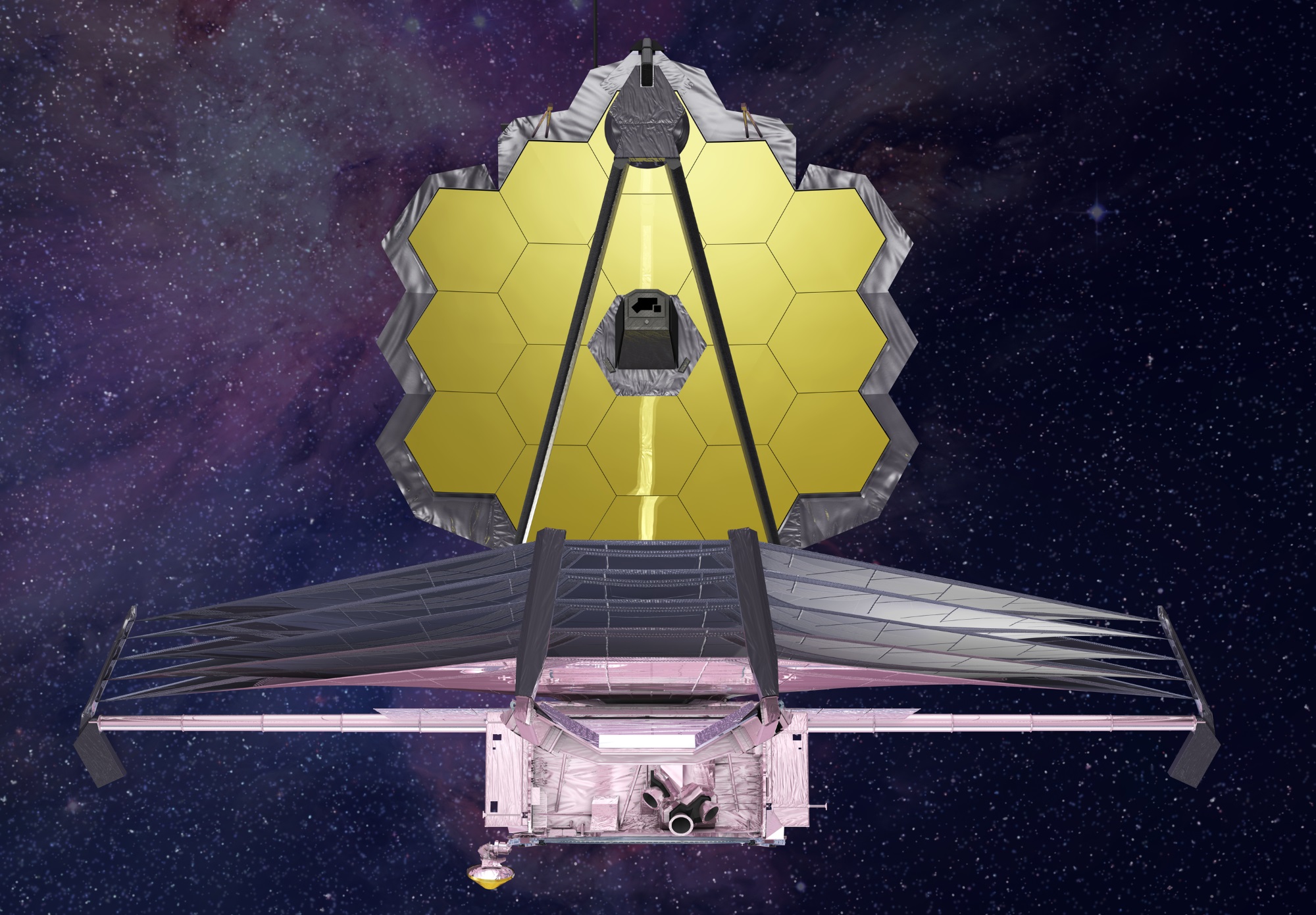 “Each of Webb’s four scientific instruments has multiple modes of operation, utilizing customized lenses, filters, prisms, and specialized machinery that needed to be individually tested, calibrated, and ultimately verified in their operational configuration in space before beginning to capture precise scientific observations of the universe,” read a NASA news release announcing the completion of the process. There are also 17 different modes in which it operates that had to be tested.

Although the image released today is in color, the Webb actually detects infrared light, which means there is a level of interpretation and abstraction to these images that we’ll get into tomorrow as the scientists explain it in detail (don’t worry, it isn’t “artist’s impression” or anything like that). The most famous space telescope of all, the Hubble, took pictures in the same wavelengths that humans see in, which simplified the image-making process but also limited it in other ways.

As the team has explained over the years of JWST’s development, using infrared (and lots of it) allows the telescope to see totally different stellar objects and substances, and also detect some that would be blocked by dust clouds and other cosmic obstacles. It’ll be especially good at observing exoplanets and their atmospheres, partly due to a setup that lets it block out a star’s relatively bright glare and focus on what’s around it.

Here are the other four first targets for the Webb, which we’ll see tomorrow:

We’ll have those images tomorrow, along with all kinds of interesting commentary from the researchers behind the Webb. This is just the beginning of a new era of space observation for NASA and space watchers around the globe — like the Hubble before it, expect JWST to be a constant presence in the science world for decades to come.