The two men running to be Texas governor this November clashed angrily over gun control on Wednesday, as America’s second mass shooting in two weeks reignited the debate around the country’s use of firearms.

Beto O’Rourke, the Democratic candidate for governor, was ejected from a press conference being hosted by Republican Greg Abbott after accusing the incumbent of “doing nothing” to curb gun violence in the state.

The public dispute came during a day of angry exchanges between Republicans and Democrats following the shooting at Robb Elementary in the Texan city of Uvalde, in which 19 children and two adults were killed.

But gun control advocates admitted they were unlikely to be able to mobilise the sense of outrage provoked by the killings into meaningful federal legislation.

Abbott called the press conference to give further information about the shooting, telling reporters that the killer had no known history of mental health problems and urging Texans to support the victims’ families.

But O’Rourke interrupted him from the floor, saying: “You are doing nothing . . . This is totally predictable.”

“This is on you until you choose to do something different. This will continue to happen,” O’Rourke said after being removed from the front of the room. “Somebody needs to stand up for the children of this state or they will continue to be killed just like they were killed in Uvalde yesterday.”

Tuesday’s massacre was the second such event in 11 days after a gunman killed 10 people in a grocery store in Buffalo, New York on May 14.

President Joe Biden on Wednesday joined other Democratic leaders in urging Republicans to support tougher gun control laws, saying: “It’s time for action. We’re here today for the same purpose to come together and say enough.” He said he would visit Uvalde in the coming days.

Chuck Schumer, the Senate majority leader, began the so-called Rule 14 process to pave the way for a rapid Senate vote on two bills already passed by the House which would expand background checks for gun buyers. The bills would force those looking to buy guns at gun shows or on the internet to undergo background checks and would give the FBI more time to investigate potential purchasers.

Schumer warned, however, that there was little chance that enough Republicans would support the bills to clear the 60-vote majority needed to bypass a filibuster.

He told senators: “My Republican colleagues can work with us now. I know this is a slim prospect — very slim, all too slim. We’ve been burnt so many times before. But this is so important.” 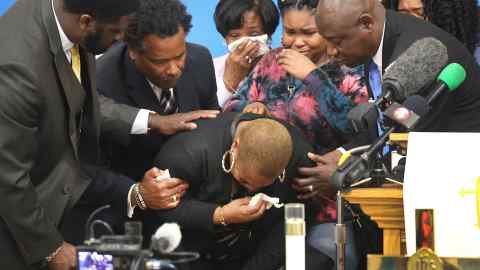 He added: “There are some who want this body to quickly vote on sensible gun safety legislation . . . I believe that accountability votes are important. But sadly, this isn’t a case of the American people not knowing where their senators stand. They know.”

Previous attempts to enforce tighter background controls have stalled in the Senate after failing to secure enough support.

Dick Durbin, the Democratic chair of the Senate judiciary committee, said he would schedule a hearing on gun violence, but not until after this weekend’s Memorial day break.

Senate Republicans have suggested they were unlikely to change their votes this time. Ted Cruz, the senator from Texas, on Tuesday accused Democrats of trying to politicise the issue and called instead for armed law enforcement officers to be deployed in schools.

Speaking on the Senate floor, Mitch McConnell, the chamber’s minority leader, did not mention the possibility of tighter gun laws. Instead, he quoted the Bible, saying: “The Lord is near to the broken-hearted.”