The female yoga instructor who went on the run to Costa Rica for six weeks after killing her love rival in Texas got a nose job and dyed her hair, presumably to alter her appearance while avoiding U.S. Marshals, a receipt left at a hostel shows.

On Sunday, Kaitlin Armstrong, 34, arrived in Houston looking very different to the picture authorities circulated of her before prior to her disappearance. Her nose appeared much thinner in a recent photo released by Marshals and the Harris County Sheriff’s Office after her capture past week.

A witness to Armstrong’s arrest claimed to have found a $6,350 receipt for the cosmetic surgery, according to ABC 13. Authorities allege that she was trying to alter her appearance in an effort to evade capture while beginning a new life abroad.

The witness claims he had seen Armstrong with bandages on her nose before her arrest on June 29 at a $50-a-night ‘treehouse hostel’ in Santa Teresa Beach.

Got a Nose Job, Cut & Dyed Her Hair in Effort To Begin New Double Life

Armstrong could be later seen after her arrest pictured with what appears to be black eyes, which typically accompany rhinoplasties, and newly cut-and-dyed hair, which had been colored dark brown to reportedly disguise herself in the Central American country. 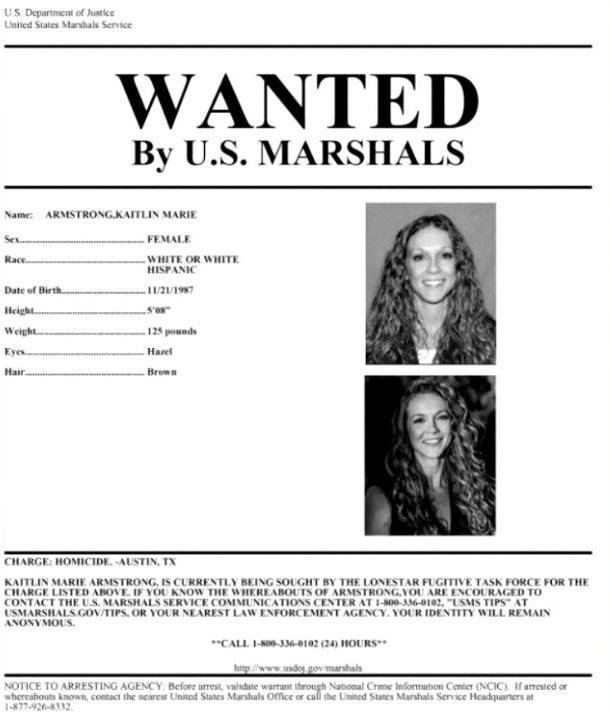 On The Run For Shooting Down Love Rival of Boyfriend

As The Shade Room reported after her arrest last week, Armstrong was wanted for the murder of 25-year-old professional bicyclist Anna Moriah Wilson in Austin on May 11, according to San Francisco Gate. Armstrong was reportedly jealous of Wilson, who used to date her boyfriend Colin Strickland.

A warrant for murder was issued for Armstrong about a week later on May 19, after she had fled the country to Costa Rica, where she was allegedly attempting to begin a new double life with the help of plastic surgery to disguise her appearance.

The U.S. Marshals Service ultimately announced her arrest on Thursday despite the alterations, and she now faces a murder charge as authorities seek to have her deported back to the states.

“The Marshals Service elevated the Kaitlin Armstrong investigation to major case status early in this investigation, which likely played a key role in her capture after a 43-day run,” U.S. Marshal for the Western District of Texas Susan Pamerleau said in a statement. “This is an example of combining the resources of local, state, federal and international authorities to apprehend a violent fugitive, bring an end to that run and hopefully a sense of closure to the victim’s family.”

Marshals said Armstrong used her sister’s stolen passport to board a flight to San Jose, Costa Rica a day after Austin police issued a warrant for her arrest on May 17.

On May 11, Wilson had been reportedly swimming with Armstrong’s boyfriend, Strickland, who authorities said used to date Wilson prior to his relationship with Armstrong, according to the news outlet.

Police were on Armstrong’s trail after receiving an anonymous tip from someone who said she wanted to kill Wilson upon learning Strickland and Wilson were involved romantically. Wilson was discovered with multiple gunshot wounds to the torso by a friend, and was pronounced dead at the scene.

Botox Bill Leads To Her Arrest

Armstrong was brought in for questioning after Wilson’s body was found, thanks in part to an outstanding warrant she had for skipping out on a Botox treatment bill in 2018 which allowed police to detain her the day after the fatal shooting.

But she was eventually released without being charged, which began her 43-day run as a fugitive. Authorities said they continued to follow Armstrong’s whereabouts, tracking her to Newark International Airport in New Jersey on May 18 four days after flying out of Austin, according to SF Gate.

Police had previously released images of possible disguises Armstrong may have been wearing prior to her capture by U.S. Marshals. Armstrong reportedly sold her Jeep for $12,000 before going on the run.