“Maybe I show him too much towards the middle on his right foot. I should have let him go to the side because there is less danger there than in the middle.”

Hannover midfielder Mark Diemers is going through his clips from the game against Schalke the previous weekend. There are 49 to examine and the session will take over an hour as he discusses each moment in forensic detail with his personal tactics coach.

That man is Loran Vrielink, founder of Tactalyse. The two have worked together for seven years. Vrielink is based in Barcelona now and his compatriot has moved to Germany on loan from Feyenoord. They are speaking via Microsoft Teams. The analysis is fast.

Club: Hannover 96 (on loan from Feyenoord)

Vrielink calls out the number of the clip. “Eight,” he says assertively. Diemers views the 14-second video. “Yeah, I am too aggressive, gambling too much,” concedes the Dutchman as he watches his opponent easily playing the ball beyond him, quickening the attack.

“Why,” Vrielink asks, “did that happen three times in the second half?” No time for niceties as he soon moves on to clip nine, showing something similar. “It was more of a transition game so there were more difficult decisions to make,” explains Diemers.

And so it continues for an hour. At the end of the session, to which Sky Sports has been given exclusive access, Diemers spends some time explain why this is such an important part of his working week – a vital element in helping him to become the best that he can be.

“Every week I see results,” Diemers tells Sky Sports. “If you ask a lot of people they won’t see it, they think they are just passing the ball, but there are so many decisions made on the pitch. This is why it is so important I study my clips even when I am away from the club.”

He is one of a growing number of clients using Tactalyse to provide that added level of insight as players seek to improve their game. The idea is that it complements the tactical instructions for the team, adding to the analysis provided by the club.

“A lot of clubs are a bit against it because they want to give the player all of the input. But a team has 25 players and there is a head coach and three assistants. It is really difficult to give all the players that attention every week because there are only 24 hours in a day.

“With club coaches you are often looking at the big moments like scoring a goal or conceding a goal. We do this twice a week. With Loran, we look at really simple moments like a throw-in and we are still thinking about how we could do more from that situation.”

Minutes earlier, Vrielink has shown Diemers just such a situation. It is clip number 30 on his list, labelled ‘ground duel from a throw-in’ and it is a moment in the match that nobody in the crowd would have spent a single second thinking about as they left the stadium. 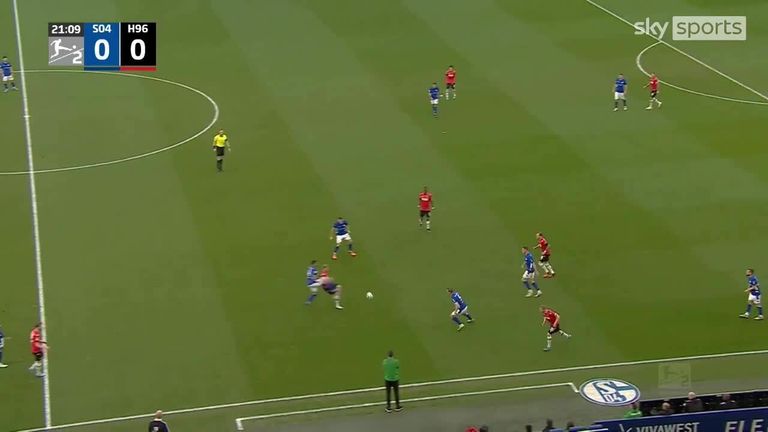 Mark Diemers marking from a throw-in against Schalke – was he too far to the right?

A Schalke player collects the ball and passes it back to the thrower. Nothing to see? Wrong. “I am too aggressive,” says Diemers. “I am too close to his right side. The striker could have turned away from me and maybe created a big chance.” Vrielink agrees.

This is detail that they can discuss partly because of the longevity of their relationship. Diemers has been on loan at Hannover for only a couple of months. Vrielink has followed his journey from Utrecht to Feyenoord via De Graafschap and Fortuna Sittard.

“Seven years ago there were different fundamentals. Loran has developed too and comes with new ideas. I have also changed position in my career so that gives us different things to focus on. Now it is about body position and moving between the lines.”

This was the focus of clip 29, labelled ‘covering ground – side’ and an example of what Vrielink implies was an example of poor awareness. “How many head-checks do you see?” Diemers concedes. “That is interesting. When you ask it like this, I don’t see enough.” 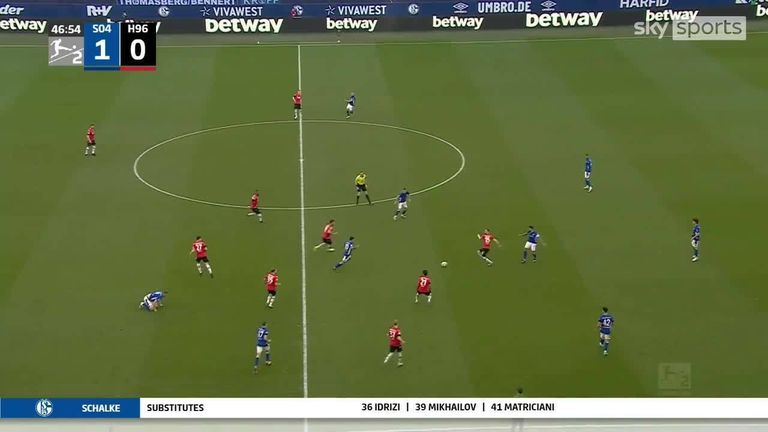 The ball is played inside past Mark Diemers (35) – was he too far towards the touchline?

“You are ball watching and dragged to the side,” adds Vrielink. They move on to clip 91, another passage of play that appears uneventful to the untrained eye. Diemers jockeys near the corner and when the ball is switched to the other flank, the danger has passed.

“I think I did really well,” says Diemers. The reply is swift. “After the situation?” There had been no head-check to ensure the player he had been marking had not eluded him if the ball came back. “I am just focused on the ball. I have to look around me more.”

Now 28, Diemers is taking on more defensive responsibility than in his youth and this explains much of the focus of their sessions now. There is still some attacking work. “Staying between the lines, creating triangles.” But defending is the aspect he wants to improve.

They move on to clip 33, ‘jockeying in a ground duel’ and discuss the importance of studying the body language of an opponent rather than just the ball. A recurring theme is a 3-0 defeat to Nurnberg that the player himself regards as a low point in an otherwise solid start.

“We talk about that a lot because it was a really bad game for me. I was too aggressive, gambling too much, and I have improved a lot on that. We focus a lot on defending because of that game. My body orientation is much better than three or four weeks ago.

As Diemers bounces his two-year-old son on his knee in the kitchen, he jokes with Vrielink that he spends more time thinking about his tactics coach than his partner – and it is only partly in jest. When he is on the pitch, their sessions are never far from his thoughts.

“Sometimes I have a moment in the game and I am already thinking that on Monday or Tuesday I am going to see this clip. It makes you sharper for the next moment. I think that is a really good thing. I think it tells you how much we focus on the details.”

Vrielink believes that awareness already elevates Diemers above many of his peers. “Three years ago I was wondering how long I could be in this process with a player but Mark was eager to learn six years ago and he is still eager to learn now,” he says.

“Mark has only gone upwards in his career and that is because he is conscious of the details. It is unbelievable how much impact he has created for himself because he knows exactly his mistakes. A player who is not doing this work will not learn from these mistakes.

Diemers himself is keen to show some humility. “I still make a lot of mistakes,” he says. “I am only human, after all. But it is nice for me to see the improvement. We have been working on this for many years now and I am still developing myself as a player.

“I am 29 this year so I am not really young any more but I think after my career I will try to help players with this video analysis, perhaps working on the pitch as well. That would be really interesting. I am already helping some of my team-mates in training.

According to Loran Vrielink

Conclusion: “The biggest mistake that players make is that they do not understand why you do what you do on the field because they underestimate the value of tactics. They do not take it as seriously as the physical or technical aspects. That is a big mistake.”