TikTok is testing a new setting that lets users restrict their livestreams to viewers who are 18 years of age and above. The company confirmed to TechCrunch that the new setting is currently in limited testing with select users.

Screenshots of the new setting shared by product intelligence firm Watchful.ai show that users who have access to the new option can navigate to their settings and toggle the “mature themes” button to restrict their LIVE to adults. The app notes that “only viewers 18 and above can see your LIVE” if you turn it on. Once you turn on the setting, TikTok will notify you that LIVE videos tagged 18+ will still be removed if they violate the app’s community guidelines, which include policies on nudity, sexual activity and violence.

It’s important to note that TikTok’s new 18+ restriction setting for livestreams isn’t a way for users to broadcast adult content, as the content is still subject to the app’s policies. Instead, it’s a way for creators to prevent minors from encountering content that’s aimed toward an adult audience or may be uninteresting to them.

The new setting comes a few months after TikTok said it wanted to start identifying which content is appropriate for younger and older teens versus adults. TikTok said it was developing a system to identify and restrict certain types of content from being accessed by teens and that it would start asking creators to specify when their content is more appropriate for an adult audience. 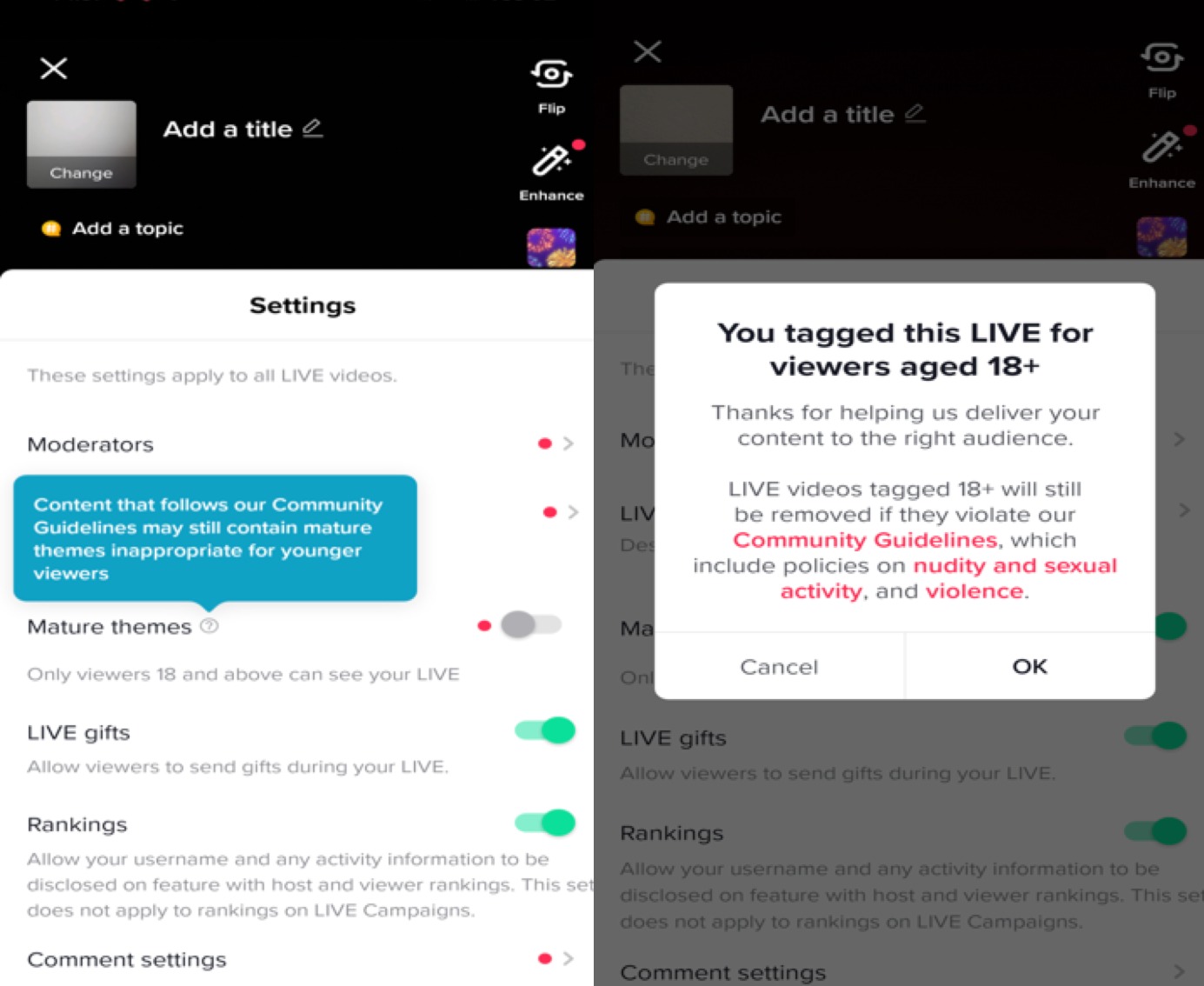 “We’ve heard directly from our creators that they sometimes have a desire to only reach a specific older audience. So, as an example, maybe they’re creating a comedy that has adult humor, or offering kind of boring workplace tips that are relevant only to adults. Or maybe they’re talking about very difficult life experiences,” explained Tracy Elizabeth, TikTok’s U.S. head of Issue Policy, who oversees minor safety for the platform, in a briefing with reporters in February. “So given those varieties of topics, we’re testing ways to help better empower creators to reach the intended audience for their specific content.”

Elizabeth noted that TikTok wouldn’t go as far as having “displayable” ratings or labels on TikTok videos, which would allow people to see the age-appropriate nature of a given piece of content at a glance. Instead, TikTok plans to rely on categorization on the back end, which will lean on having creators tag their own content in some way. The new 18+ restriction setting is an example of this idea being put into practice.

At the time, the company had also said users will be able to choose which “comfort zones” — or levels of content maturity — they want to see in the app. Parents and guardians will also be able to use TikTok’s existing Family Pairing parental control feature to make decisions on this on behalf of their minor children.