The UK is set to become the first country in the world to pay drug companies a fixed fee for supplying antibiotics in an effort to tackle the growing global crisis over resistance to the drugs.

The aim is to give companies a better incentive to develop new antibiotics, which would be held back to treat patients who really need them, while restraining overprescribing that leads microbes to develop drug resistance.

Health experts estimate that antimicrobial resistance (AMR) kills more than one million people a year worldwide, putting pressure on the medical profession to cut back use of antibiotics in all but the most serious cases.

Under the deal being struck by the NHS with Pfizer of the US and Shionogi of Japan, the drug companies will be paid a fixed fee of £10mn a year. The current reimbursement system based on sales volume often fails to provide sufficient revenue to justify research and development spending. 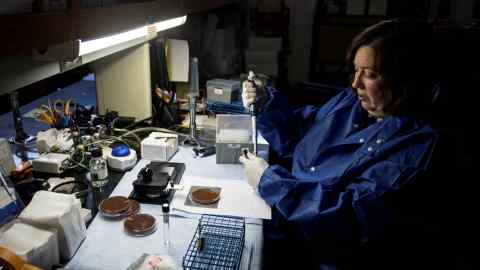 The contract value was set at a level that would give international companies an incentive to invest in antibiotic research and development, if other countries pay proportionate sums scaled to their gross domestic product.

Thomas Cueni, director-general of IFPMA, the international pharmaceutical manufacturers trade body, agreed: “We call on the other leading governments to put all efforts into progressing their own incentive models so that sufficient global scale is achieved that will attract the necessary investment in R&D.”

Two new antibiotics made by Pfizer and Shionogi have already passed a key value-for-money evaluation by the National Institute for Health and Care Excellence (Nice). NHS England aims to conclude innovative “subscription-style contracts” with the manufacturers this summer.

Nick Crabb, Nice programme director, said: “The ultimate goal is to ensure the NHS has access to effective new antimicrobials to call on when needed and patients aren’t left without treatment options in the face of growing antimicrobial resistance.”

Pfizer and Shionogi submitted their drugs for evaluation when the government announced a pilot scheme in 2020, in which two antibiotics would be selected for subscription contracts capped at £10mn a year for 10 years.

Several European nations and the US are considering similar schemes that separate payment from prescription volume, either through an upfront market entry payment or annual subscriptions like the NHS England model.

“This is an important step in our world-leading approach to incentivise innovation in antimicrobial drugs and the battle against drug-resistant infections,” said Blake Dark, NHS commercial medicines director.

Dame Sally Davies, UK special envoy on antimicrobial resistance and former chief medical officer for England, said: “I am delighted that Nice has demonstrated the value of innovative antibodies in a subscription-style payment model. I call on the NHS to continue this pilot over the next few years. Ideally, we need to add two innovative and needed antibiotics each year.”

Pfizer’s Zavicefta and Shionogi’s Fetcroja are used to treat severe infections of the abdomen, lungs and urinary tract by bacteria that are resistant to other antibiotics. Both are administered by intravenous infusion.

Nice worked with the Policy Research Unit in Economic Methods of Evaluation in Health and Care Interventions, based at York and Sheffield universities, to assess the two drugs.

The universities used a complex procedure that took account of their value in allowing other medical procedures to go ahead, reducing the spread of infection to other people and ensuring that the NHS had a range of antibiotics available to treat resistant bacteria.

Taking all these factors into account, Nice estimated that Fetcroja would be worth 16,200 quality-adjusted life years (Qalys) to NHS patients over 20 years, while it put Zavicefta’s value at 8,880 Qalys. Using Nice’s yardstick that a treatment is justified if it costs £20,000 per Qaly, both would justify a subscription of £10mn a year.

The Trade Secrets Newsletter is the FT’s must-read email on the changing face of international trade and globalisation. Written by FT trade specialist Alan Beattie, it is delivered to your inbox every Monday. Sign up here